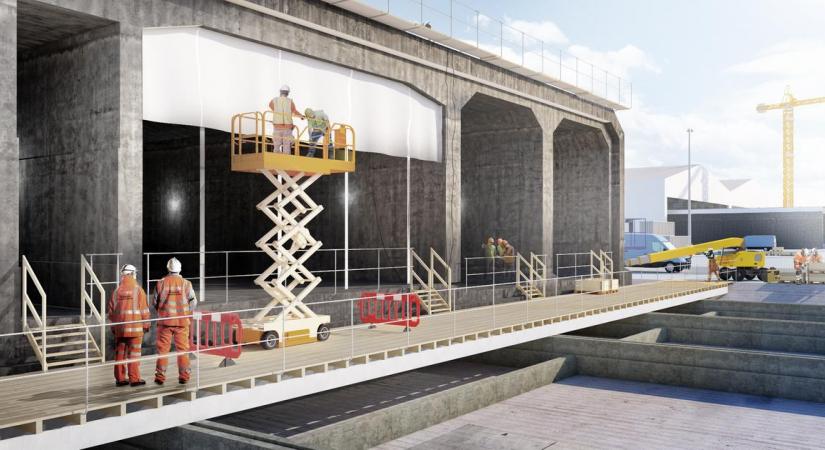 "Lolland, Region Zealand and Denmark can become known as the place in Europe, from where world-class infrastructure projects can be built and technological knowhow supplied."

As support grows from politicians in Danish government for a permanent tunnel element factory in Rødbyhavn, more than just those on Lolland are clapping their hands.

Chairman for the regional council, Heino Knudsen, Branch Director in Danish Industry, Michael Svane, and Mayor of Lolland, Holger Schou Rasmussen, are unified in their claim that “the Femern Belt fixed link is a project with immense perspectives”.

The Femern Belt fixed link infrastructure project is not just a job and growth driver of great importance for future transport in both Denmark and the rest of Europe; the project also contains a palette of possibilities with huge perspectives for e.g.  the environment and the green transition.

A role in international projects

It is a very positive sign, that the government with its plan “Denmark forwards – infrastructure plan 2035”, implies the retention of the tunnel element factory in Rødbyhavn. Beyond the construction period of the Femern Belt project, Rødbyhavn is suggested as a production site for elements for coming large infrastructure projects in Denmark, such as the Harbour Tunnel in Copenhagen, the Kattegat Connection, the Als-Fyn Link and perhaps the future Energy Islands. The factory also has the possibility of playing a role in international infrastructure projects.

A permanent factory will make these construction projects more economical as there will not be a need to establish new production facilities.  It would also have an enormous impact on the local labour market, as these types of projects will also attract engineers, researchers and other high-level competences from both national and international sources.

All these factors will stabilize the region’s continued development and is expected to further affect Falster, Southern Zealand, Langeland and Southern Fyn.

The immediate gains of a permanent tunnel element factory are obvious, but the long-term perspectives reach much further.

In the construction phase, the Femern Belt project focuses on green solutions and energy efficiency, and the aim is to make the project as CO2-neutral as possible.

The tunnel will have its own transformer station that will supply green electricity to the trains and electrical installations, such as ventilation and lighting, as well as to the nearby charging stations for electricity-driven road transport vehicles.

The tunnel will contribute to the green transition of the transport sector. At present, Lolland produces 8 times more green electricity than there is demand for, and Lolland’s position as a green energy island is an important piece of the Danish green transition picture. It would therefore be logical to use the surplus production of green energy to produce future green infrastructure on Lolland.

During the construction period, an important capacity of new knowledge and know-how will be accumulated about e.g. energy efficiency and green solutions, which will place Danish companies in a stronger position with regards to future international mega-infrastructure projects.

It would also not be difficult to imagine the construction docks and factory site as a production facility for future offshore wind turbines.

Taking the collaboration between public and private actors into account, the ambition must be to become world leaders within the sustainable construction sector, including running and maintenance of mega infrastructure projects, accelerating export of green knowledge, green products and solutions.

Lolland was once well known for its shipbuilding industry.

In the future, Lolland, Region Zealand and Denmark will be known as the place in Europe, from where world-class infrastructure projects can be built and technological know-how supplied.