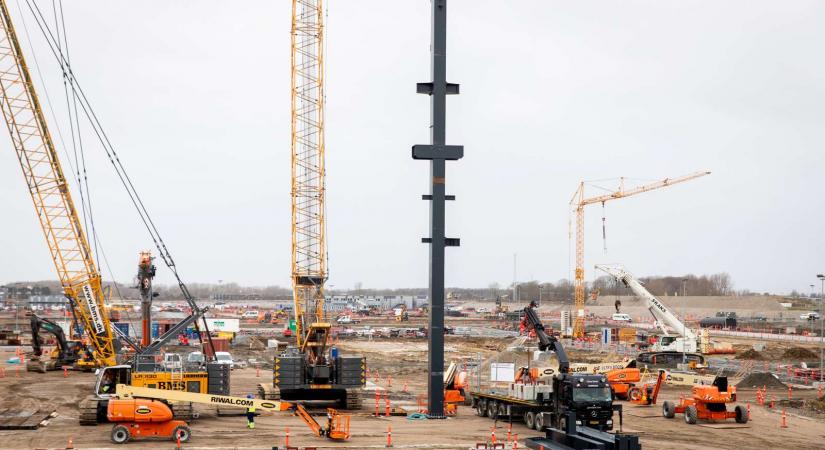 Give Steel A / S has begun erecting the steel construction for the first of a total of three production halls, where the tunnel elements for the Fehmarnbelt connection will be produced, Femern A/S states.

Give Steel A/S, that was awarded the main contract for the new production halls in the Fehmarn project by Fehmarn Link Contractors (FLC), has just begun the installation of the in all more than 9,000 tons of steel structures, which will form a total of three production halls in Rødbyhavn, Denmark.

“The first thing we are erecting is one of the main pillars, which measures 800x1200mm in circumference. The pillar is 27 metres high and weighs almost 27 tons. The number of tons that installed daily will vary, but we are trying to have the steel rafters delivered as close to installation time as possible, so that we avoid wasted time and double handling. ”

First hall completed by the end of 2022
With the commencement of the steel construction, the Fehmarnbelt project has reached an important milestone:

“The work of erecting the production halls is a crucial and major milestone in connection with the establishment of the tunnel element factory. The factory will really take shape over the coming months. When the factory is in operation, the halls will be the centre for the tunnel element production, which thereafter will be sailed out and lowered into place in the Fehmarn Belt,” says technical director, Jens Ole Kaslund, Femern A / S.

The construction of the halls will take over a year and the first hall is expected to be ready for inauguration by the end of 2022.