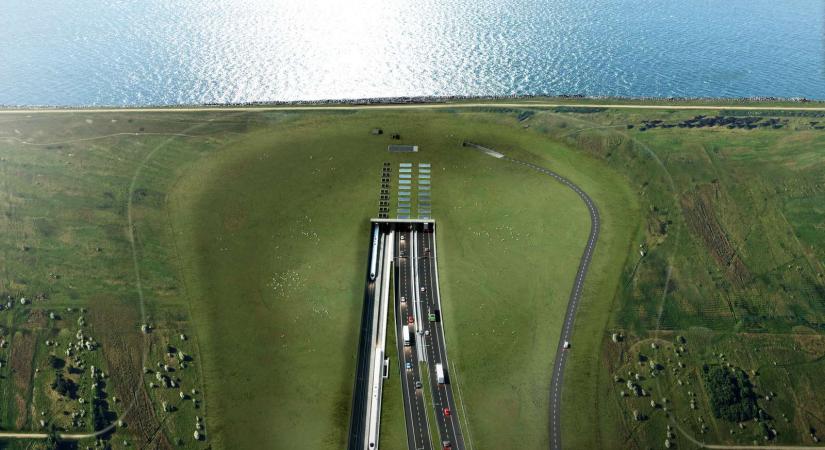 The Tunnel Portal as it will appear. Illustration: Femern A/S

Femern A/S will this spring put the major task of establishing the Fehmarn Belt Tunnel's track and catenary system for the electric trains out to tender. The contract has a value of around 200 million Euro. Extensive market research has recently been carried out to ensure that the tender is issued with the latest knowledge in the field.

The world's longest submerged tunnel, the upcoming Fehmarn Belt tunnel between Denmark and Germany, is to be equipped with the best available electrified railway system technology and energy-efficiency solutions.

This central task will be put out to tender in the spring with an expected financial framework of around 200 million euro, states Femern A/S.

The upcoming tender – called the TTC contract (Tunnel Track and Catenary) – includes a total of 25 kilometers of double-track railway and catenary, built for speeds of 200 km/h, of which 18 kilometers are in the tunnel itself and a total of 7 kilometers are outside the tunnel on Danish and German side respectively.

In order to increase the companies' opportunities to form relevant consortia and participate in the tender, Femern A/S is now issuing additional information about the tender to the market.

Hopes for large and well-qualified competition

"We have experienced great interest from potential bidders for further details ahead of the spring tender. We are naturally interested in contributing to the companies being able to form consortia and bid for the task. This is with the hope of encouraging a large and well-qualified competition in the tender phase," says Kirsten Christensen, Contract Director at Femern A/S and responsible for the railway installations.

Tender to be published in the spring of 2023

Femern A/S has published the new information to the market about the tender on the EU's tender database TED.

In order to ensure the best possible tender material, Femern A/S also carried out a thorough market survey earlier this year, where, among other things, industry was consulted to get the latest input regarding climate-friendly and energy-efficient solutions.

"We have given potential bidders for the task the opportunity to come forward with their know-how, which was welcomed by a number of major players in the market. It has given us valuable knowledge, which we are actively working with, so that the offer is as strong as possible, and so that we have a climate-friendly and energy-efficient railway when we open," says Kirsten Christensen.